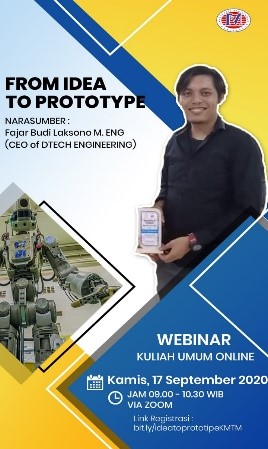 Surakarta, 18 September 2020 S1 Study Program – Mechanical Engineering University Sebelas Maret (UNS) held a guest lecture which was conducted online. This guest lecture was attended by students, lecturers, and alumni of Mechanical Engineering UNS. The guest lecture this time was entitled “FROM IDEA TO PROTOTYPE”. The speaker at the guest lecture was Fajar Budi Laksono M.Eng, who was an alumni of the Diponegoro University Chemical Engineering S1 in 2014. After completing his undergraduate education he continued his Masters education at Pukyong National University, majoring in Interdisciplinary Program of Marine Convergence Design, and he graduated in 2016. He is usually called Mas Fajar. Mas Fajar is now working as CEO at one of the design manufacturers and prototypes in Indonesia, namely PT. DTECH INNOVATION INDONESIA. Mas Fajar started his career in 2014 as C0-Founder and CEO of an Indonesian company “initiated” in the city of Salatiga.

This guest lecture was different from the usual. This is because it is still in the Covid 19 Pandemic situation, so this guest lecture is being held online via Zoom. Participants in this guest lecture totaled 206 participants. In this guest lecture, he gave material about prototype design, history of PT. DTECH INOVASI INDONESIA, what tools the company has produced, the methods and tips needed if you want to create and open a company that is engaged in prototyping and design, and finally he taught us about Design Thinking. The achievements that have been processed by PT. DTECH INOVASI INDONESIA is: 1 Place – GE & Fuse (On Wing Jet Engine Inspection Design Global Competition 2017) with the participation of approximately 40 groups from around the world, then 1st Place – GE & GrabCAD (3D Printed Engine Bracket, and Design Global Cpmpetition 2013) with 700 participation Reason groups from different countries, and

His motivation is to wrestle with prototyping and design because he believes that his abilities and interests are in the field of design creation and prototyping. From college he has won many tournaments in the field of engineering, both held at the university, national and international levels. Examples include: 1st winner GE Consistent Image Jet Engine Inspection Challenge at the Fuse & General Electric competition in the USA. In addition, he also has many published journals from a long time ago, for example, namely: Application of in situ Liquid Ferrate (VI) for 2-Bromophenol Removal which has been uploaded to the Journal of the Korean Society of Water and Wastewateer.

In this guest lecture, he advised students about 4 things: 1. Take even the smallest opportunity if there is (This means that he teaches us to think wisely to take advantage of all the opportunities that exist) 2. Please try everything you want (Because we are still students, so follow a lot of lecturer research, make publication journals, increase relationships, etc.) 3. In order for students to be more creative in the future (He hopes that current students can train themselves to make an innovation) 4. So that in the future we can help others (He hopes that in the future we will dare to open jobs for those in need. “I hope that in the future Indonesian students are ready to face the demographic wave, and ready to take risks, ”said Mas Fajar (Surakarta, 18 September 2020). 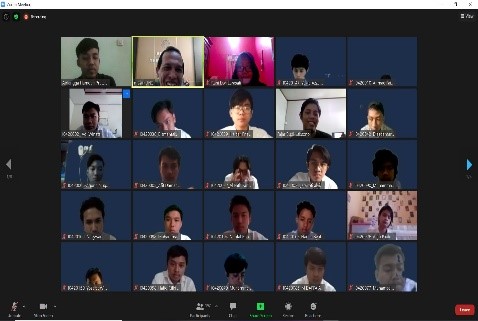